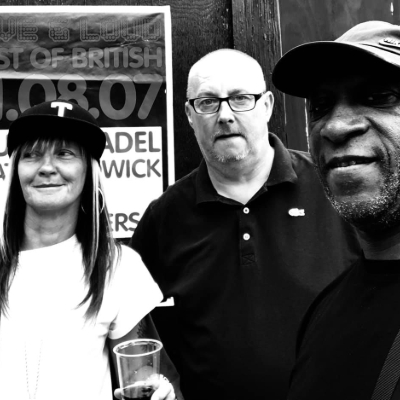 Ladies and Gentlemen, AWESOME 3: The band with the daft name that should of never existed. 3 crazy cats from a Manchester council estate who went on to write some of the most seminal anthems of the rave scene! A Manchester band who never get recognition as part of the ‘Madchester’ scene because everybody thinks they come from London – are you having a laugh?)

Awesome 3 were at and part of every glorious and inglorious moment of that scene from illegal raves to spike island … from the Hacienda to the Thunderdome and every other dark moody sh*thole in the north and beyond.

Steve Gorton / Dave Johnson / Shane Hughes met for the first time by pure accident in Slow Bongo Floyds studio in West Didsbury in August 1990. It was a Saturday and the band met at about 1:30pm and by 5pm they had a manager (Kenny Grogan of Spin Inn Records and Manchester underground fame) and were signed to A&M records. Tell us of another band in history to get a record deal within 4 hours of meeting? (f*cking madness) But that was the Awesome 3 – everything was crazy!

Within a month Awesome 3 had released their first single HARD UP and went touring the world with dancers at that time Ady Moore & Mark Hardicre. It went mental everywhere and they always dragged every scally and low life from Wythenshawe along with them, mayhem ensued everywhere they went.

The band followed ‘Hard up’ with the monster piano vocal classic ‘FREEDOM OF LIFE’ featuring the vocals of Wayne Allen followed a few months later by the double a side POSSESSED/PIN UP GIRLS …. (‘Possessed’ being a track way ahead of its time) It was at this time Shane Hughes decided to hang up his 909 and 303 and left the band. Awesome 3 then became Awesome and guess what A&M records dropped them! No record deal, no money and down to 2.

Up steps Pete Orme, Awesome didn’t really know Pete but had seen him around and about in Manchester underground scene, so one Saturday morning the steps were taken “Hiya Pete you fancy joining the Awesome 3 – f*ck it yeah, why not”. Awesome 3 mk2 was born!
Within a month, they were in spirit studios recording, the beast that is ‘DONT GO’ featuring the vocals of Julie Mcdermott. Awesome 3 put it out themselves, independently on Entity Records and it went mental! City beat/XL recordings signed them up for a huge amount of money and off they went, touring again. Not long after this, Lynne Tait joined the group to cover vocal duties and they carried on bouncing up and down stages all over the world.

Not bad for a group of football hooligans from Wythenshawe (Oh yeah Pete’s from Salford, but Hey-ho we can’t all be perfect)