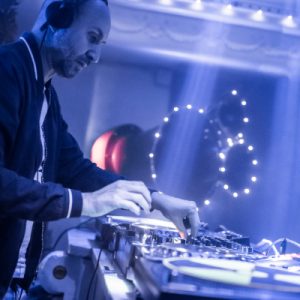 Dan Rewind got his first exposure to the rave scene back in 1991. Feeling so passionate about the music and what it meant to him, he purchased a set of 1210’s and frequently visited Bitin Back Records in his home town of Gravesend in Kent. For him DJing was only ever a hobby as he would be spending every weekend for many years, visiting some of the most iconic raves which built the old skool scene that we all know and love.

During the mid-1990’s a group of likeminded ravers started up a magazine dedicated to the Rave scene called ‘To the Core’ regularly reviewing events and interviewing DJ’s. Once this then came to an end, he spent a short period of time working for Terry Turbo reviewing One Nation events for the Scene Magazine.

In terms of the style Dan Rewind enjoys playing, this would range from anything from the early Drum and bass sounds from the likes of Metalheadz, Ram Records and Doc Scott through to around 2003. This would also include some of the non anthem hardcore/breakbeat from the early to mid-90’s.

Since 2011 he has played at a number of events and venues throughout the UK. But the highlights of his career and big break came from performing at legendary events such as Dreamscape & Moondance. He has played alongside a number of old skool royalty including Slipmatt, Ellis Dee, DJ Rap, Tango & Ratty, Vibes, Easygroove, Dr S Gachet, Ramos and many more.

As well as his passion for music he also runs his own event called DNBTEN, which focuses on the Drum and Bass sounds between 1993 – 2003 and is also part of Rewind back to the old skool.

Although Dan loves and respects vinyl DJ’s, he has mastered Traktor to try and inject something fresh in to his sets and push the limits of technology.