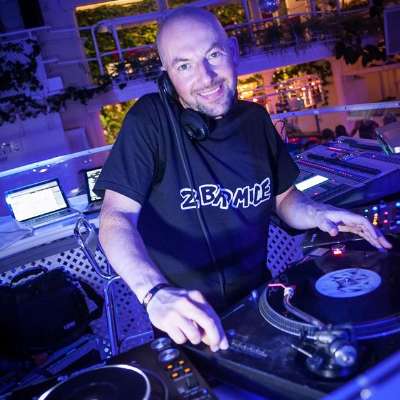 Faydz began his adventures on the wheels of steel during the explosion of the early 90’s UK Rave scene (originally going by the name DJ Dark Fader) and over the past 3 decades, he’s rocked some of the biggest parties in the business, from the iconic brands of the 90s such as Dreamscape, Fantazia and Raindance, to today’s huge events, including Boomtown, Hardcore Til I Die and Tranzmission.

He’s in regular demand at events all around the UK and internationally. His turntable skills have taken him as far as Australia (for an exclusive back to back set with LTJ Bukem and the RatPack) and across Europe, to places including Germany, Greece, Holland, Poland, Mainland Spain and Tenerife. He’s also a firm favourite every year in the party capital of the world Ibiza.

His unique style of fusing the art of Hip Hop turntablism with the energy of electronic dance music, has elevated him to become one of the leading artists in the world of rave and why he’s the man of choice for the legendary 2 Bad Mice (Moving Shadow Records) as scratch DJ on their Live PA’s and music productions.