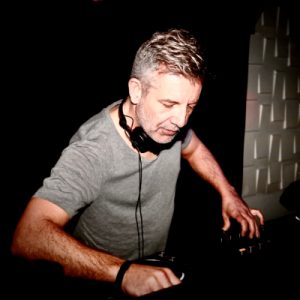 Force began his rave career at the unforgettable Oscars nightclub on Clacton pier, at the time voted one of the top 5 clubs in the country. As so many did in those days, he became full submersed in rave culture, DJing and production being signed to the formidable Kniteforce records in 1992 as DJ Force & The Evolution. The breakbeat hardcore sound was sweeping the nation and even the like of Carl Cox were championing the Force & Evolution sound. In 1994 a name and label change came about, and the boys were taken on to Slipmatts Universal imprint under the guise of A Sense Of Summer, where more rave classics followed.

It was in 1995 that Forcey and fellow Evolution member Darren Styles, decided to produce as a duo and the now famous Force & Styles brand was born. Known for their uplifting melodies and sing along vocals the conveyor belt of happy hardcore classics began to flow. Classic tracks such as Pretty Green Eyes, Field of Dreams, Heart of Gold, Pacific Sun and Paradise & Dreams were born. Many of which have since been covered and seen chart success. Pretty Green Eyes now hitting Gold and over 750,000 sales. The late 90’s being a perfect storm for the hardcore duo.

Since those hectic 90’s days Forceys music career has continued in various guises both as a songwriter and as a DJ. Working with various artists over the years across many genres, from house to trance, hardcore and techno, Forcey has has a hand in writing for many artists over the years. And when it comes to DJing versatility is the key, having supported Radio 1’s Dave Pearce on over 60 Dance Anthems dates across the country, Forcey can turn his hand to playing just about any genre of music. Trance, House, EDM, Breaks, Drum & Bass and of course Classic House and Hardcore. There’s nothing quite like keeping the crowd on their toes and keeping them guessing what might be coming next.

Now in his 3rd year with Old Skool Ibiza, who’s knows what might get played this year, who knows if he’ll even be standing, one thing is for sure though, you’ll all be dancing!