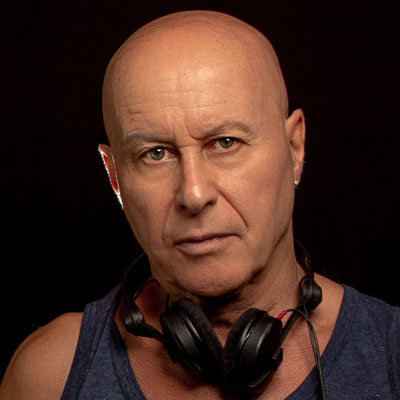 Legend is often the word people use when they talk about Graham Gold-one of the most influential and ground-breaking DJ’s on London’s Kiss 100 between 1990 -2004. There at the beginning of house music in 1988, he spent 5 years in the DJ Mag Top 40, when it truly meant something and has sold over 700,000 mix albums(6 x Gold Discs- British Phonographic Institute Artist). He has played in clubs and festivals in over 150 cities across 50 countries including Pacha, Amnesia, Space, Ultra Music Festival, Glastonbury, Homelands and Summadayze alongside DJ’s such as Carl Cox, Sven Vath, Steve Lawler, John ‘00’ Fleming, Roger Sanchez, Nick Warren, BT, Deep Dish, Paul van Dyke, Tiesto, Ferry Corsten to name just a few!

Fast forward to 2019, and whilst those heady days of global travelling are gone, he still remains very much a recognised name in the industry. He plays his deep house, progressive house, progressive trance and melodic techno at all of the cool parties on Koh Phangan, Thailand including Guys Bar, Maya, Jungle Experience, Hollystone, Lost Paradise, Loi Lay, Addict & Eden Garden. He undertook his first Goa at the end of February/early March, and he sells out his tour dates every time he returns to the U.K.

Recent productions and remixes on Dynamica, Coldharbour, Moon Island, Souled, Bequem, Krafted, Endemic, Jungle Funk and P&S Music have helped cement his transition from a world-famous trance DJ into a cool underground house/techno DJ. ‘Blue Camels’ along with a collaboration with Russian DJ Samotarevis forthcoming on Assymetric while ‘Spacebo’, a joint production with DJ Lion has found a home on Lion’s Berlin based label Patent Skillz and due in March 2020..

Graham previously ran the Koolworld, Peach and Good:As record labels where he took numerous tracks from the underground and turned them into commercial successes. One of his biggest singings was Mat Darey’s ‘Liberation”’ which made the UK Top 20. Good:As also managed the UK & Ibiza diaries of Armin, Tiesto and Ferry Corsten from 1998-2001. He was also a sought after TV presenter and hosted the clubbing TV show ‘BPM’ which aired on the UK’s number one commercial channel as well presenting a few shows from WMC for MTV.

Graham has been a DJ his whole life and lived through disco, soul, jazz funk and was there at the beginning of the house music phenomenon. In 1985-1986 after years on London’s Pirate radio stations he presented the soul show on London’s Capital FM ahead of his move to Kiss 100FM. His real ‘craft learning years’ were at Gullivers in London’s Mayfair from 1980-1989 where he played 6 nights a week, 7 a hours a night to the capitals movers, shakers and the biggest artists in black music. It’s no wonder clubbers and the whole industry call him a legend! He is to be found in the global online dictionary WIKIPEDIA.

To check his sound please visit: