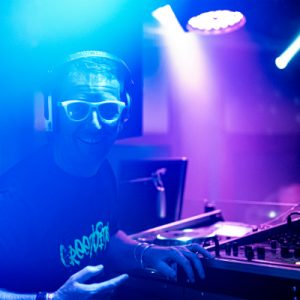 Greenbins’ career as a DJ stretches right back to the warehouse parties that brought about a cultural revolution in the North of England in the late 80’s and early 90’s. He was a regular DJ at those parties, and also a resident DJ at a small, but legendary club in the Blackburn area called Monroe’s from 90 – 91.

From Monroe’s other residencies and guest spots soon followed at venues and events such as Sequins, Zone & Jooce in Blackpool, Angels in Burnley, Manhattan Heights & Peppermint Place in Blackburn, Quadrant Park in Liverpool, the Revenge Parties, the Blackburn warehouse parties, the 808 State Show on Sunset FM, Maximes in Wigan, Manhattans in Southport… to name just a few.

Greenbins was also an original resident DJ on Friday night with DJ Welly at the Pleasuredrome in Farnworth, and was also to feature heavily when the night was moved to Trafford Park, Manchester and became the massive Life at Bowlers.

Fast forward to this millenium and Greenbins has DJ’d at events for Fantazia, Drop The Beat Festival, Big Fish Little Fish, More Cake, Pier Jam, Madchester, Blackpool Festival and many more. He was also the first DJ to become a resident for the hugely respected event Rejuvenation in Leeds.  Old Skool Ibiza has been one of the highlights along his journey, playing at venues such as Eden, Ibiza Rocks Hotel Pool and Itaca.

Greenbins musical flavours vary from such genres as house, techno, breakbeat, full-on anthems and lots in between. He can stick to just one genre or an enjoyable mixture of all.

Here is a link for his set from the Old SKool Ibiza Event at Itaca, Ibiza (May 2019)