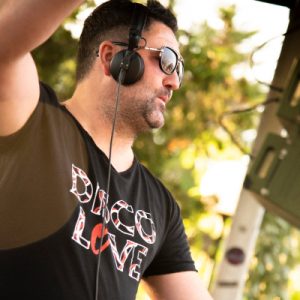 JASON FUBAR has been performing since 1988 and over the years has gained a massive amount of knowledge in all genres of electronic dance music. He started his career playing around the south coast of the UK and playing at the holiday destinations of Corfu in Greece and Magaluf in Majorca, to playing at some of the world’s greatest clubs Around the Globe.

Fubar has managed to take his formula to a global audience, playing in India, USA, the Middle East, Africa, Asia and all over Europe.

You can’t really type cast or pigeon hole Fubar into any one genre as he’s one of those djs that has crossed barriers and moved with the times. Since the early days of Acid House playing in London and the South Coast moving on to Funky US Vocal House and then on to the Rave movement, through the years of Trance, Hard House and back to Electro, Techno, & full circle back to Tribal, Vocal, Electro House – JASON FUBAR has weathered every changed and adapted to move with the times.

Even today he refuses to be held in any genre commenting “ I Like all kinds of Electronic music from Funky House through to full on Drum n Bass so why be picky and not follow a few paths instead of one” Recently a lot of Trance djs are seen playing House sets, but Fubar has been crossing both paths for many years.
Fubar also does a fantastic “Guilty Pleasures” style set fusing 80’s Pop with 90’s Chart & Dance and pulls on his musical knowledge to spin to pretty much any crowd and adapt where most DJs will lose their heads.

However, Fubar has probably made the most impact on the Trance scene and delivers a High octane, full on Trance Set delving into the past, Present & future Trance Anthems. He has played alongside ARMIN VAN BUUREN, TIESTO, PAUL OAKENFOLD, FERRY CORSTEN, PAUL VAN DYK, SANDER VAN DOORN, EDDIE HALLIWELL, JUDGE JULES and many more of the Trance world’s top players.

Old Skool is something that Fubar treasures and his Vinyl Revival nights have seen him at the helm of some of the UK’s biggest Club Classics events like Retro, Back to the Old Pool & Hacienda with Fubar dragging out some Legends of the scene to play alongside him. It’s a Fusion of House Club Classics, Retro Anthems & Old Skool Rave Anthems.