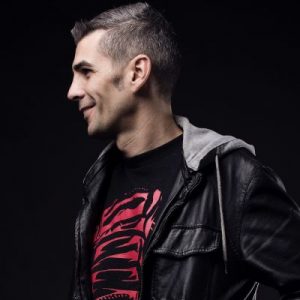 Jonay Amador, known as DJ Jonay, has been playing Old Skool and upfront drum & bass for 25 years so far visiting the most important clubs in Spain as well as festivals in the UK, Europe and the US. In 2014 he received an award from the IBA (International Breaks Awards) as the Best National Old Skool DJ in Spain.

During the last few years he has played in Ibiza where he has gained recognition among the British audience and his birthday parties have grown to cult status for the Old Skool and electronica lovers always selling out year after year. Jonay has become one of the most relevant figures within the Old Skool scene both in Spain and England where he has played for renowned events such as Fantazia, World Of Rave, Retro, Rejuvenation and Time Machine among others.

Jonay also produces music releasing several records on his own, from limited white labels to major record labels in Spain, and he has also collaborated with talented producers like Bizzy B, J Majik (Viper Records) Pex L and many others.