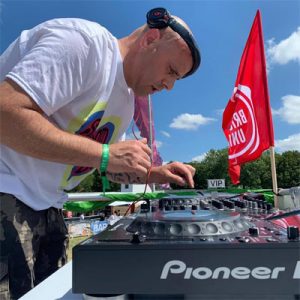 Martin Dear is an Essex/London based DJ who’s sound is mainly newer remixes and original versions of classic house and Old Skool rave anthems. He is also known to dip his toe into modern styles such as techno and tech house, and sometimes even D&B/Jungle.

From Superfly at The Square, to Dirty House Inc, to Universoul all-dayers, to Groove Machine; Martin has been involved in the Harlow event scene for over 20 years, but it’s been the last year or two that things have really taken off.

Following his set at the first EOS event in October 2017, Martin achieved a life long dream and found himself booked to play in Ibiza for Detached Parties in May 2018, this led to a phone call from Slipmatt asking him to play an extra set on the final night at Plastik.

After Ibiza, he played his first ever sets in London clubs and started to see many of the mixes that he uploaded to Mixcloud hit the top 15 of their respective charts.

On the back of this Martin decided that Harlow needed an Old Skool event and launched Old’s Kool in November 2018 which has in it’s own right become a very successful event with the last 2 events being a complete sell out.

2019 was an extremely good one and Martin played many events in the UK including his first big festivals too with sets at both Sunbourne/Moondance Festival, and Back of Beyond Festival.