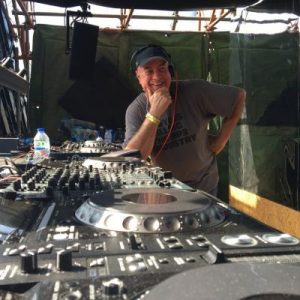 Rhodesy. A Brief version of his-story!

Born in 1969, Manchester. Had his first club residency at age 16 in Harrogate. Lived all over the country before finally settling in Hertfordshire in about 1987. Played at the opening party of the legendary Hertford night club “Zeros”, which led on to a remarkable 15 year residency. Also a resident at WGC’s “West One” on various nights for most of the 1990’s.

Worked on Graham Gold’s Sunday show, then on the early breakfast show with Lindsay Wesker, both at the original Kiss 100FM.

Remixed Bombscare in 1994 with Rob Haigh. A Graham Gold & KoolWorld mix (commissioned by Rhodesy) was on the flip side, and it was sold in to European & UK record shops as a fake US import, shifting thousands of copies in just a few weeks. Officially joined 2 Bad Mice in 1995 as the front-man for the press campaign for the re-release of Bombscare on MOSHED (Arista) Records.

Joined Moving Shadow Records in Stevenage as “promo mailing chimp” at the same time that Goldie was recording Timeless there, upstairs in one of the bedrooms.

Became full time production assistant at Moving Shadow when they relocated to The Trident Studios building in Soho.

Appeared in Company Magazine, then The Sun, and finally live on ITV’s ‘This Morning’, BUTT NAKED!! His arse has been seen by over 10 million people!

Converted “Faces” Nightclub, Hoddesdon in to “The DogHouse” for the visionary promoter Ricky Harding. Rhodesy DJ’d there, alongside Todd Terry, Kenny Dope and Tom Findlay – Groove Armada to name drop a few!