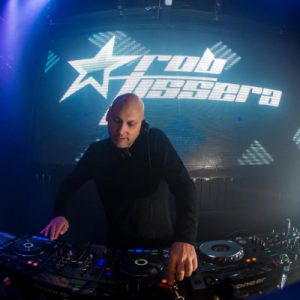 Rob Tissera has been on the scene since 1989 when he was put in jail for 3 months for organizing acid house parties in the north of England. He’s currently featured in Mixmag for these mad antics!!

Since then he’s not only travelled the world as a international DJ but he is a founding father of the club phenomenon Kissdafunk. Rob’s Kissdafunk brand has travelled the globe and held residencies in Dubai , Singapore , Bali, Ibiza , Mallorca and Bahrain. He’s recently mixed the new KISSDAFUNK album along with the squatters. The album was a ‘featured’ release on Beatport, Juno & Itunes.

Rob started his successful career making music back in 1991 under the names P.P Orange and Flipped out for Ark Recordings. He also had a huge success in ’96 when he released ‘Kick Up The Volume’ on XL records.

Rob is also Creator of the seminal dance classic ‘The Day Will Come’ as his alter ego Quake with Ian Bland. The track along with many others has appeared on a raft of ‘Best of trance’ compilations and is currently riding high in the Beatport, Juno and Trackitdown.net charts with brand new mixes from several top level remixers. the Heatbeat mix is currently being played by Armin Van Buuren and a host of the best DJ’s on the planet.
Rob’s Quake remixes of Ralph Fridge, Armin Van Buuren, ATB ,York and Erasure all hit the national top twenty in the year 2000.
Over the years Rob has received constant support by Galaxy, capital fm, Kiss, radio 1 and many internet radio stations. He has also done the Radio 1 Essential mix and been broadcast live from Ibiza on the Dave Pearce Dance Anthems show in 2005.

Rob is a true musical chameleon. he has successfully played and produced literally everything from house, electro, old skool, trance through to hard house.

Rob has been lucky enough to play at every major festival and at the very best venues across britain and the rest of the world.
Even after more than 20 years in the business, rob is still able to remain fresh & current due to his versatility and he loves every single minute of it!!!