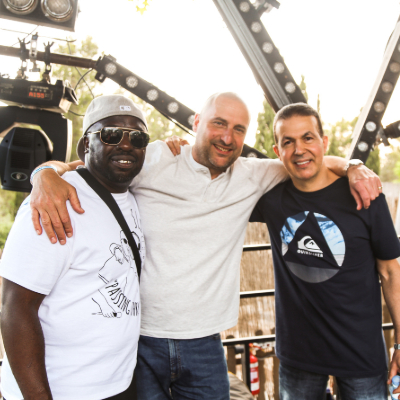 SL2 aka DJs Slipmatt & Lime aka Matt Nelson & John Fernandez are one of the biggest original early rave names in the business, and they are still going strong. They have performed all over the world in front of crowds up to 100,000 people, playing all the major raves in the early nineties and also spinning the decks across every continent all over the UK. Their tunes still get played everywhere from the most underground rave events right through to the commercial clubs and still get regular plays on Radio 1 and prime time T.V.

SL2 started making music way back in 1986 when they bought their first drum machine, a Roland TR505, and teamed up with North London rap duo Gino & Mikey. This music was very raw and basic back then but after endless blagging they still managed to get played in their local nightclub in Tottenham. In 1988 Matt & John met a crew from Ilford which included Devious D and the man who went on to be SL2’s MC, the man like Jay J. They produced a variety of rap and Hip House recordings together, but this was more of a learning curve for the team rather than serious production.

After countless trips to Noise-gate Studios in New Cross, South London and hours of drum programming in the bedroom, SL2 eventually released their first single in 1989 called Do That Dance / It Ain’t Nothing which was signed by Simon Gough of B/Ware Records. Again, this was a learning curve for SL2 as they never saw a penny even though the record sold thousands. The duo recorded the single engineered by the late Michael Menson who was famous for his work with Double Trouble & Mike West (aka Rebel MC).

After the Simon Gough experience, Matt and John decided to fund their own follow up in 1990 called The Noise/Bassquake and which was recorded at Watershed Studios in Wood Green. They released on white label and the record flew off the shelves. With the taste for the record business now, they decided to start their own label Awesome Records and gave The Noise/Bassquake a full release. Awesome Records number 2 was DJs Take Control / Way In My Brain which they engineered themselves with the help of Alan Zippo from New Age Studios in Whetstone North London. The 500 promos they pressed sold within a couple of hours and within a week SL2 had an incredible 8 offers on the table for a record deal!

The boys decided to go with XL Recordings and subsequently went on to experience untold success with DJs Take Control / Way In My Brain when it hit number 11 in the national chart and earned then a slot on Top Of The Pops. They then followed up with ‘On a Ragga Tip’ which in April 1992 hit number 2 in the national charts and the number 1 spot in the Network Charts, staying in the top 7 for an incredible 8 weeks. At this time, Slipmatt and Lime were propelled into the media spotlight with many TV appearances including 2 more appearances on Top of the Pops as well as Dance Energy on BBC2 with Normski.

Longtime friend Jay J toured with SL2 (and still does to this day) as their live MC, alongside dancers Kelly and Jo who also appeared with the group at their shows all over the world and who are now retired from dancing.

More recently, Slipmatt and Lime have been recording again and have also remixed a few of their old hits and had great success with the latest versions. The lads have released re-recordings of their biggest singles on the World of Rave label and are currently working on new tracks. 2018 was a busy and productive year that saw remixes of the infamous ‘DJs Take Control’ by Slipmatt, Shadow Child, Sooney & DJ Boring and released on vinyl via Food records, which instantly sold out! This year the SL2 schedule is once again great with many festivals, club events and PA appearances booked in around the whole of the UK and Europe.

The SL2 tracks are certainly timeless classics and still very popular and are highly regarded amongst ravers and their families across the world.