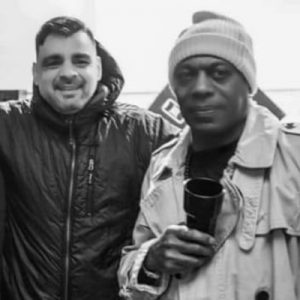 Top Buzz was established in 1988 by MC Patrick McPhee (“Mad P”), DJ Mikee B and DJ Jason Kaye. They all originate from North London.

They were one of the first to popularise the darker sounds of jungle techno as it began to emerge from the hardcore rave sounds of 1991. The band released the Livin’ in Darkness EP ( https://www.youtube.com/watch?v=TOVsSZpRxtw ) on Basement Records in 1992, which encapsulates much of the flavour of the era. They were headline performers at Amnesia House, Fantazia, Universe, Dreamscape, and Obsession, amongst many other ground breaking events of the era.

A distinct feature was the ragga MCing of MC Map P, strongly influenced by Jamaican dancehall. Patrick often referred to the team as “Two Blacks and a Bubble”, a reference to their ethnic origins, with ‘bubble’ referring to Bubble and Squeak, the Cockney rhyming slang for Greek (Jason Kaye is a Greek Cypriot).