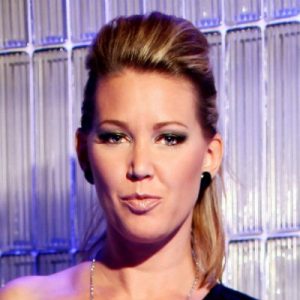 Vicky Devine is one of the leading DJs to break out of the UK…. with her successful career taking her all over the world and which led to her becoming a main room resident at one of the most popular and well known nights in Ibiza – Judgement Sundays. Also an established producer, record label owner, TV / radio presenter and event promoter, Vicky’s hard work is testament to her love of all things dance music and one of the reasons she continues to be at the forefront in todays dance music scene.

Vicky has been involved in music in some capacity throughout most of her life. Reaching Grade 6 in Piano and playing classical guitar throughout her school years, she was quickly enticed into the dance music world and has worked within the industry ever since. Beginning as a club reviewer and interviewer for a variety of dance music magazines, she then went on to work in promotional roles for a number of UK based events. There was always a DJ inside though and she was soon behind the decks spending hours after college learning how to mix. This coupled with her passion for music, endless enthusiasm and her gritty determination helped build her career and established her as a well respected DJ and producers in the dance music scene. As a result Vicky has gone on to wow fans in the UK and indeed around the world, with a reputation built on her uplifting yet driving sets which span a variety of genres and incorporate elements of trance, tech and progressive. She has played at some of the biggest and most respected nights and clubs in the UK including The Warehouse Project, The Gallery, Gatecrasher and Pams House, has been included on several festivals and tours including A State of Trance (Den Bosch), and Slinky and has DJ’d for years across every territory around the globe.

Over the years Vicky has been a regular guest at many clubs and bars in Ibiza and this eventually led to her gaining a main room residency at Judge Jules’s massive Judgement Sundays night at Eden. Playing weekly for over 10 years at the busiest night in San Antonio meant playing regularly alongside many of the leading names in the scene, as well as establishing her name as one of the favourite Ibiza residents both with DJ’s and clubbers alike. And lets not forget Vicky’s other Ibiza stints at UltraViolet, Derailed, the Judgement Boat Parties and the all female DJ “Charlys Angelz” events which featured on the island for several years and which she played an integral role in running and promoting. Vicky has also played at several of the islands others superclubs over the years including Hï Ibiza, Amnesia, Privilege, Space, Es Paradis, Summum, El Divino and The Old Zoo as well as holding a residency for 6 years at the huge BCM on neighbouring Balearic island Majorca. Ibiza though is her home, and it is here she loves to play. She is a well known face on the circuit there and she continues to be involved in new projects both DJing and behind the scenes on the island year after year.

On the production front Vicky has also seen much success. She had early productions as part of collaborations released on Infectious Distribution, Solar Records and F Active Music, before moving onto working on solo productions. She has gone on to have releases on some of todays biggest labels – most notably Spinnin, Blackhole, Fraction and Recoverworld, – and has had corresponding remixes from and collaborations with some of the scenes most recognisable names and emerging stars. Her tracks have been supported by the likes of Armin Van Buuren, Tiesto, Paul Van Dyk, Paul Oakenfold, Gareth Emery and Sean Tyas, have had amazing reviews in top music magazines DJ Mag, IDJ, Mixmag and M8, have regularly reached high charting positions both in Beatport and Trackitdown, have had plays on some of the biggest Radio Shows and Podcasts from around the world and have featured on numerous mix compilations. Never one to rest on her laurels, 2012 saw the launch of her own label DE:VA Recordings. As the name alludes to – the label represents music with plenty of attitude – including releases from the lady herself. Indeed Vicky’s studio itinerary is always bubbling away!

Radio has played a massive part in Vicky’s career to date and is something she was involved with from a very early stage. Having provided Ibiza reports and interviews for several UK based stations, and having also hosted her own show on Ibiza dance music station Holiday FM, she went on to produce her own monthly “DE:VA” radio show on Afterhours FM as well as airing as a podcast on Podomatic. Over the years she has had a multitude of guest mixes and interview’s on other high profile radio shows also including Judge Jules’s BBC Radio One Show, Woody Van Eyden and Alex Morph’s Heavens Gate Show, Kiss FM, Eddie Halliwell’s BBC Radio One Show, and on Judge Jules’s Global Warm Up show, not to mention on several International online stations. In addition Vicky has been involved in television work with Rapture TV, MOS TV, Living TV, WTFI and was one of the presenters for Ibiza Live and Clubland TV in Ibiza whereby she interviewed and presented for a range of high profile music and TV stars.

Vicky’s love affair with electronic music is an ever evolving adventure and one that shows no sign of slowing anytime soon. Check out her website and other social media platforms to keep up to date with all things Devine.