Victoria Newton aka Strike (You Sure Do) 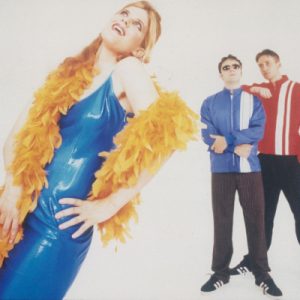 Strike’s (U sure do) very own lead singer…. VICTORIA NEWTON

Victoria’s musical journey began in Perth Australia when she started serenading audiences with a collection of her favourite jazz songs. It wasn’t too long before the London Jazz and Latin music scene called and without delay she packed her bags and headed for the Big Smoke of London. Little did Victoria know that a chance recording session at Fresh Records would change the course of her musical life!

It was in this very studio that she met internationally renowned DJ/Producers Matt Cantor (Freestylers) and Andy Gardner (Plump DJs) who asked Victoria to record the vocal for their track ‘U Sure Do’. The rest as they say is history, and it was at that moment that the underground dance group ‘Strike’ was born. With a total of 4 singles all getting into the UK top 40. Strike was at the top of their game using such tracks as Cubic 22 in sampling their chart hitting singles.

Strike was prominent in the UK underground dance movement until late 1994 as the club mix of ‘U Sure Do’ blew up in UK clubs far and wide. ‘U Sure Do’ was released as a single and went to number 4 in the UK charts after which Strike began touring extensively. ‘U Sure Do’ went on to have massive chart success throughout Europe and then hit the number 9 spot in the Australian charts. This much loved track soon took the band to Spain, Italy, Norway, Holland, Germany and Japan. Strike went on to produce another four UK Top 40 Hits and the critically acclaimed album ‘I Saw the Future’.

Today Victoria is back home in Perth where her musical dream first started. She currently heads the Jazz vocal program at the prestigious Western Australian Academy of Performing Arts (WAAPA), working with the next generation of up and coming superstars here in Perth. Victoria continues to perform regularly at jazz clubs and festivals in both Perth and London.

This is the first time in Ibiza for Victoria. She will be smashing out her much loved ‘U Sure Do’ PA. Then supporting fellow R4TL member Dj Paul ‘AviT’ Larner in an unmissable freestyle bonanza of breakbeat and soulful harmonies alongside a live performance of R4TL single, ‘United as One’. Along with some other very special yet to be announced tracks.

If you love Rave, and love live music, then this event is for you. This is Hardcore at its best.

Strike (You Sure Do) aka Victoria Newton
https://youtu.be/kkDDzKO8rhw